WINNIPEG — One of the country’s leading experts says Manitoba needs to find the political will to bring in safe injection sites. Dr. M.J. 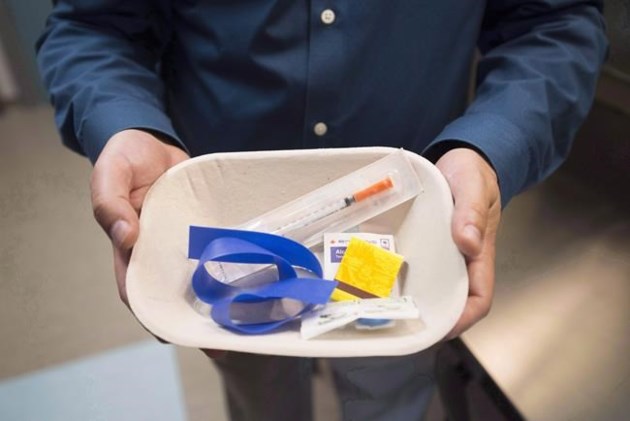 WINNIPEG — One of the country’s leading experts says Manitoba needs to find the political will to bring in safe injection sites.

The epidemiologist with the B.C. Centre on Substance Use and a principal investigator into a five-year evaluation of Vancouver’s first safe injection site, said it’s no longer a scientific question whether sites should be established.

“The question in my mind is not whether Winnipeg needs this facility but whether or not there will be the political will or courage,” Milloy told The Canadian Press on Tuesday in an interview from Mexico City.

A copy of a report commissioned by the Manitoba government on addiction services and provided to the media Monday morning included a recommendation to open a safe injection site in Winnipeg. By the afternoon, the recommendation was deleted in a copy posted by the government online.

Dr. Brian Rush, who wrote the report, said the recommendation was removed in the final draft because he didn’t have enough evidence and data to back it up.

Health Minister Kelvin Goertzen has said the government didn’t interfere with the report. “There simply doesn’t exist the data and evidence in Manitoba” to back up the need for an injection site, he said Wednesday.

“We have not had the incidences, not even remotely close, of tragedy, of tragic overdose, for example, in the streets or on the street corners of the city of Winnipeg,” he told the house in response to a question from Opposition NDP Leader Wab Kinew.

“In fact, fully 70 per cent plus of the incidents are happening in homes of users or of users’ friends.”

Pallister said at the time he was waiting for Rush’s report and would follow its recommendations.

Milloy said Pallister’s argument is a common one but “there are areas in Winnipeg which have the sorts of concentrations of urban poverty and drug use which … would be well-served by supervised injection facilities.”

“I don’t think the argument that we are not Vancouver, we don’t need this, is necessarily founded on good science,” he said.

Kinew said Wednesday experts agree safe consumption sites work and the government has taken it off the table “simply because of the premier’s own personal beliefs.”

Winnipeg’s Main Street Project, which offers clean needles and harm reduction supplies, has seen demand for needles jump to 1.5 million from 500,000 in the last year.

The downtown shelter is applying for federal approval to open a safe consumption site, which involves reaching out to the province. Executive director Rick Lees said he knows “they have a different view.”

“These are people that are homeless in many cases or unable to find a safe place to use,” Lees said. “They are also burdening our health-care system … so it makes sense for this particular population to have a safe consumption site.”

Note to readers: This is a corrected story. A previous version said Milloy is an infectious disease epidemiologist with the B.C. Centre for Excellence in HIV/AIDS