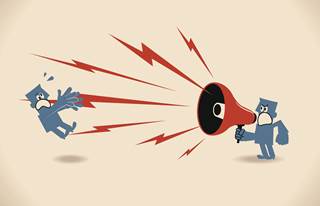 Is fear the best method for educating the public about the risks of contracting HIV, or does it further stigmatize an already underserved population?

From the early 20th century through World War II, scare tactics, such as using images of skulls and crossbones or pictures of questionable women, were used to warn about the dangers of sexually transmitted infections.1

The same themes were employed at the outset of the AIDS epidemic, but activists criticized these messages as stigmatizing. In the early 1980s, ethics professionals began to question whether fear posed a threat to the autonomy of those the advertisements were meant to reach.1 More recently, bioethicists have worried that fear-based public health campaigns can elicit shame instead of evoking awareness as intended.1

It seems that public health educators are divided on whether to use fear to spark behavior change regarding HIV/AIDS, smoking, and obesity. Some contend that these “shock tactics” work and outweigh any potential risks, but others believe that fear-based campaigns can stigmatize already vulnerable groups.

Fear as Fuel for Changing Behaviors

Fear-based campaigns have been defined as efforts to make individuals internalize a threat of death, disease, suffering, loss of beauty, loss of social status, or even social exclusion.1 A fear-based HIV campaign doesn’t simply mean using graphic images of death and disfigurement; instead, messaging can make a threat feel immediate and make target audiences feel vulnerable to that threat.

The general consensus for those in favor of leveraging fear in these campaigns was that it is important for targets to understand the risks of the behavior in “an emotionally genuine manner.”1When science-based messages fail to convey the seriousness of the disease, adding emotion could spur more informed decision making.

“The stuff we did in the early ’90s was fear based, shocking and scared people into changing their behavior,” said Louie Moses, founder and creative director of Phoenix-based marketing agency Moses Inc., in Ad Week.2

This method resonated with some early gay activists, including Larry Kramer and Randy Shilts, who believed subtlety couldn’t adequately communicate the gravity of the disease and its effects.1

In the early 21st century, as overall case rates for HIV and AIDS declined in the United States, there were upticks in the rate of HIV infections among young minority men of color who had sex with men.1 In particular, Latinos were twice as likely—and blacks were four times as likely—to be infected with HIV than whites.1 Concern that these populations weren’t getting the message incited energy around using fear to prompt safer sex.

The “HIV Is No Picnic” campaign developed by the grassroots Stop AIDS Project took a reality-based approach to exposing the myth of living well with HIV that was promoted by the pharmaceutical industry. Despite calls to end the campaign that detailed the painful reality of living with HIV, Stop AIDS Project’s program director defended the initiative: “We consider this a truth-in-advertising campaign.”1

These results were supported by a groundbreaking 2015 meta-analysis in Psychological Bulletin. Researchers reviewed studies conducted between 1962 and 2014 and concluded that fear appeals were effective at positively influencing attitudes, intentions, and behavior.1 Further, the authors wrote that there were few circumstances where fear tactics were not effective and there were no identifiable circumstances under which they backfired and led to undesirable outcomes such as stigma.1

Some public health professionals involved in AIDS prevention in the 1990s and 2000s were concerned that the use of fear could be seen as preying on the panicked. To avoid that perception, Jim Curran, an official with the Centers for Disease Control and Prevention, pushed that all public service announcements at the time include ways that HIV could not be spread, instead of focusing on the negative.1

The national social marketing campaign “HIV Stops With Me,” launched in 2000, aims to prevent the spread of HIV while also reducing the stigma associated with the disease.4 The campaign focuses on the personal strengths of real HIV-positive people. Visitors to the HIV Stops with Me website engage with the campaign’s spokesmodels, read about issues related to HIV/AIDS, and learn about accessing local services.

In late 2010, gay advocacy groups demanded that New York City pull the plug on the “It’s Never Just HIV” campaign on the grounds that it paints a grim picture of life as an HIV-positive man.

“We know from our longstanding HIV prevention work that portraying gay and bisexual men as dispensing diseases is counterproductive,” said Marjorie Hill, PhD, chief executive officer of Gay Men’s Health Crisis, a New York City-based non-profit. “Studies have shown that using scare tactics is not effective. Including gay men’s input, while recognizing their strength and resiliency, in the creation of HIV prevention education is effective.”5

In 2015, the Arizona Department of Health Services also chose to focus on hope.

“We needed a coordinated media strategy and it needed really to focus less on fear-based messaging and more on empowering people,” John Sapero, office chief for HIV prevention for the Arizona Department of Health Services, told the New York Times.6

The health department tapped Moses to create a public service announcement to drive people to visit HIVAZ.org, where they could get information about testing and other resources. After two months, the site attracted 9000 new visitors. Year-over-year, repeat visitors to the site rose from 15 percent of visitors to more than 40 percent.6

“We kind of learned from the past we didn’t want to shock and scare and judge the group of people we were talking to,” said Moses. “Since then, the research says that shocking and embarrassing and shaking your finger at the potential consumer does the exact opposite. It just makes them hide.”6

This shift in tone marks a trend in favor of messages of support and hope over shock and shame. This more positive approach is driven by a better understanding of the disease and less stigma, thanks to celebrities like Charlie Sheen speaking up about their status. One-quarter of new infections affect people ages 13 to 24, and messages of positivity are key to reaching millennials, who bristle at being goaded.2

Social determinants of health—conditions in the places where people live, learn, work, and play—affect a wide range of health risks and outcomes. Even the strongest supporters of emotionally charged campaigns admit that fear alone isn’t enough to drive behavior change.1

Whether scare tactics are used in public health campaigns and, perhaps more importantly, how such efforts will be received by at-risk populations, depends on the political and social climate of those communities. Both approaches have been shown to move the needle in increasing awareness about the risks of contracting HIV.