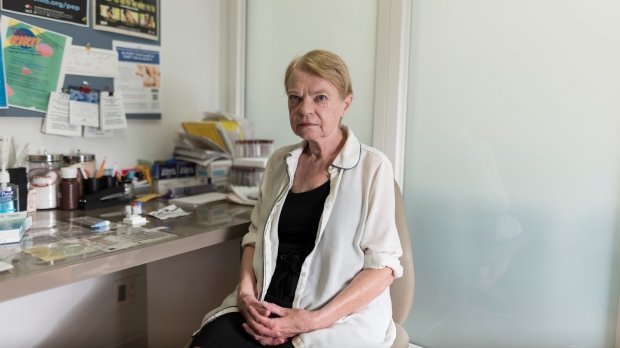 Jane Greer of the Hassle Free Clinic poses for a photograph in Toronto on Wednesday, August 7, 2019. (THE CANADIAN PRESS/ Tijana Martin)

TORONTO — Researchers are launching a study on HIV self-testing kits with the aim of gaining federal approval for the first such device in Canada.

Dr. Sean Rourke, a scientist with the Centre for Urban Health Solutions at St. Michael’s Hospital, said the clinical trial will begin in Toronto on Wednesday before expanding across the country in coming weeks.

The neuropsychologist said data will be collected on 1,000 people who will take the one-minute, finger-prick blood test at sexual health clinics in several provinces.

Rourke said he’s hopeful the study’s findings will persuade Health Canada to approve the first HIV self-test for use as early as 2020.

Rourke, who serves on the board of the Canadian Foundation for AIDS Research, said the number of new HIV cases in Canada has increased in recent years, in contrast to the downward trend seen in other G7 countries.

As of 2016, there were more than 63,000 Canadians living with HIV, one in seven of whom were unaware of their condition, according to estimates released by the Public Health Agency of Canada last year.

Rourke said diagnosing the roughly 9,000 Canadians who don’t know they have HIV is critical to helping them access life-extending treatments and preventing further transmission of the disease.

The World Health Organization has recommended countries implement self-testing strategies as a way to reduce the number of people living with undiagnosed HIV.

According to WHO, dozens of countries, including France, Germany, the U.K. and the U.S., have adopted self-testing regulations. And Rourke hopes this study will be the “last step” in adding Canada to that list.

A spokeswoman for Health Canada said in an email that the department has not received any applications for a medical device licence for at-home HIV test kits, despite reaching out to industry members to provide regulatory guidance.

And absent federal approval, it appears Canadians are finding other ways to access this technology.

Anna Maddison, senior media relations advisor for Health Canada, said the department is aware of unlicensed kits being purchased by Canadians online and across the border, and has taken steps to mitigate the health risk.

Late last year, the agency gave researchers at St. Michael’s the greenlight to lead a clinical trial on an HIV self-test manufactured by Richmond, B.C.-based bioLytical Laboratories, the spokeswoman said.

According to the diagnostics company, the test is more than 99 per cent accurate when compared to traditional HIV detection methods.

Rourke said the question he and other researchers will be looking at is whether people can use the devices properly.

He said the study will examine participants’ ability to follow the instructions for the test, which involves drawing a drop of blood and mixing it with solutions, and understand their results. Some will also be asked to interpret mock tests to see if they can identify clear negatives and positives as well as results that are more ambiguous.

In addition to two sexual health clinics in Toronto, data will be collected from facilities in Montreal, Saskatoon, Winnipeg and Victoria.

Rourke said some of the clinics in the trial were selected because they cater to populations considered to be at higher risk for HIV, including men who have sex with men, injection drug users, Indigenous populations and immigrants from countries where the virus is prevalent.

Jane Greer, director of the Hassle Free Clinic in Toronto, where the study will kick off next week, said health workers have been administering similar rapid HIV tests on patients for about 15 years.

But despite the calls of medical professionals and activists, Greer said point-of-care technology still isn’t available in many communities in Canada, in part due to what she sees as a lack of effort from some provinces.

She hopes business interests will propel HIV self-tests to become as commonplace in pharmacies as take-home pregnancy tests.

“I just hope that the trials go well and the (self-testing) device is approved and can be made available in a meaningful way,” said Greer.

Len Tooley, evaluation and advancement director at Vancouver’s Community Based Research Centre, said the technology could remove many of the barriers people face to getting tested for HIV, including lack of access to a health-care provider, travel and wait times and concerns about confidentiality.

Tooley said many people who are at risk for HIV are subject to forms of social marginalization that can sow distrust in the medical system, and self-tests could help empower outreach workers to deliver care in their communities.

Some have raised questions about whether people who use HIV self-tests will seek out follow-up treatment, but Tooley said those concerns are rooted in assumptions that people with HIV don’t care about their own health.

“Any challenges that exist with self-testing probably also exist with service-provider-based testing as well,” he said. “The key point really is around whether people have access to their own health information. And that’s really what HIV self-testing allows in a way that we haven’t had a chance to see yet.”