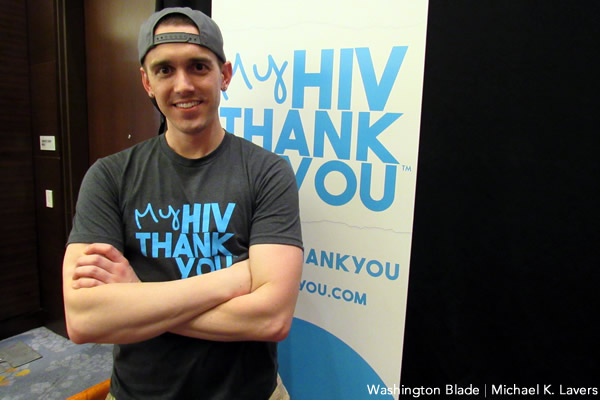 Josh Robbins is an HIV/AIDS advocate from Nashville, Tenn., who is using Mytesi, a medication that prevents chronic diarrhea in people with the virus. He spoke with the Washington Blade on Sept. 7, 2017, at the U.S. Conference on AIDS in D.C. (Washington Blade photo by Michael K. Lavers)

A study that a pharmaceutical company released earlier this month indicates chronic diarrhea is among the top symptoms from which people with HIV/AIDS suffer.Napo Pharmaceuticals, which is a subsidiary of Jaguar Health, on Sept. 12 released the results of a survey of 271 board certified gastroenterologists in the U.S.

Ninety-three percent of the gastroenterologists who responded to the survey said they have people with HIV in their practice. The survey also found 84 percent of their patients said diarrhea ranks among their “top three complaints,” while 53 percent described diarrhea “is the number one complaint in HIV/AIDS patients.”

The survey found 65 percent of the respondents’ patients with diarrhea said the condition is “chronic.”

“While it’s typically not the main reason patients come to see me, frequently my patients with HIV inform me that they suffer from chronic diarrhea,” said Dr. Maurizio Bonacini, associate professor of clinical medicine at the University of California, San Francisco, in a press release that Napo Pharmaceuticals released.

Bonacini noted diarrhea “appears to be more common in patients who have been HIV-positive for several years” and is “most likely due to” the virus’ impact on the lining of the intestine.

“Diarrhea is a significant problem in many HIV patients, and unfortunately, they think there is nothing they can do and that they just have to live with it,” he said.

Diarrhea is among the serious side effects that antiretroviral drugs cause in people with HIV who are on them.

Napo last October launched Mytesi, a drug that seeks to provide long-term diarrhea relief in people with the virus. It is the only antidiarrheal drug for people with HIV in the U.S. and has been approved by the Food and Drug Administration.

Jaguar Health President Lisa Conte in a press release notes the Centers for Disease Control and Prevention estimates more than 70 percent of Americans with HIV will be at least 50 by 2020. She also said chronic diarrhea “remains a significant, under-reported complaint of HIV/AIDS patients, and it is a problem that will increase significantly as the HIV+ population gets older.”

Josh Robbins — an HIV/AIDS advocate and educator from Nashville, Tenn. — is taking Mytesi to prevent chronic diarrhea. He told the Washington Blade on Sept. 7 during an interview at the U.S. Conference on AIDS at the Marriot Marquis Hotel in downtown Washington that he “didn’t know it was an issue” when he received his HIV diagnosis in 2012.

“I knew that it was an issue for me, but I didn’t know it was an issue (for people with HIV),” said Robbins. “I just thought this is something that I have to live with.”

Robbins told the Blade that one of his doctors told him the same thing. He said another doctor told him “diarrhea’s not an issue” when he told him that he had begun working with Napo Pharmaceuticals to promote Mytesi.

“I’m like ok . . . you’re not in the bathroom with me,” said Robbins. “I said ok, well I really want to try this drug so I’m either going to get it from you or order it from India or something.”

Robbins told the Blade that he once had to reschedule a doctor’s appointment because diarrhea forced him to use the bathroom.

“They made me reschedule my appointment because I wasn’t there,” he said. “I was literally in the bathroom shitting.”

His doctor prescribed him Mytesi after a test determined he did not have infectious diarrhea. Robbins told the Blade he “really didn’t see a difference” in the first couple of weeks.

“Then it was just like a light switch,” he said. “It started going away. It wasn’t this remarkable moment. It just made me feel normal.”